It’s a month since Christmas and many people have redundant phones and laptops languishing in drawers around the house. Each year Britons throw away two million tonnes of electronic waste. But is there a solution to dumping them in landfill?

It can often seem easier – not to mention cheaper – to replace old technology with newer, shinier models.

But a growing number of people are instead choosing to repair and recycle their slow computer or failing phone. Events around the UK are springing up, teaching people how to repair their outmoded technology.

“Our mission is for people to keep stuff for longer,” says Janet Gunter, co-founder of the Restart Project in London, which holds community events during which volunteers help people repair or recycle their electronics.

The project began in 2012 and claims it has prevented 1,270kg of electronic items being dumped since then.

“We encourage [people] to reuse and recycle stuff and if something is broken to sell it for parts,” said Ms Gunter.

Volunteer Dave Lukes has been involved for three years, inspired by his passion for the “challenge of fixing” things, as well as the environmental issues.

“The amount of stuff we throw away is just ridiculous,” he said. “The numbers are just incomprehensible.” 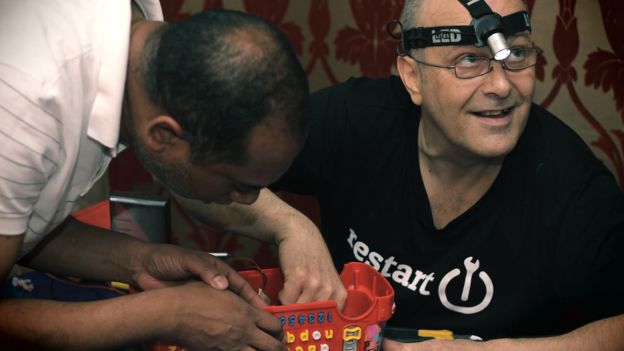 “One of the great things is to see people with things like laptops,” said Mr Lukes. “They are small enough to be very mysterious, but you can open them up to see what the bits are.

“Quite a few people come through with laptops and they are fascinated that they can fix them with your help.

“It is very empowering for people to see that they can fix things.”

The Repair Cafe movement began in Amsterdam in 2009 and has spread around the world, including more than 30 registered groups in the UK.The Malvern Hills Repair Cafe, in Worcestershire, was founded in December 2012 and attracts about 50 people each month.

To date, about 1,500 people have taken along more than 2,200 household and personal items to be examined and assessed. It is used not only use it as an opportunity to fix or recycle things, but to meet with like-minded people, enjoy a coffee and make new friends.

Roman Iwanczuk, a retired electronics engineer, has helped out at the cafe since it started.

“I just believe that we throw away far too much stuff that can be relatively easily fixed if you have the knowledge to do so,” he said.

Technology journalist David McClelland said while finding the time to repair items could be difficult, “very little beats the sense of satisfaction” of fixing something yourself.

But he says manufacturers do not make it easy for people to repair devices.

“The trend for miniaturisation and portability in consumer technology – squeezing more power, battery life, screen real-estate into ever smaller devices – means that they become increasingly difficult to repair or replace components,” he said.

“Take your new smartphone or tablet for example.

“While it’s not impossible to take these complex devices apart – to replace a cracked screen, for example, or a worn battery – it’s not something that is actively encouraged. The likes of Apple, Google or Samsung don’t publish the equivalent of a Haynes Workshop Manual for smartphone disassembly, preferring instead that you come to one of their retail stores or service centres; or buy a new model altogether.

“Even if you do persist and open up your phone, repair can be very fiddly requiring specialist tools and custom replacement parts. Again, not impossible, but the bar is fairly high and that’s probably why an industry of smartphone repair shops has popped up.”

But he adds that repair events are about far more than just fixing things. From community spirit, to helping the environment and retaining important skills.

“Repair cafés help build life-skills and, as they are often organised by local residents and volunteers, community values too,” he added.